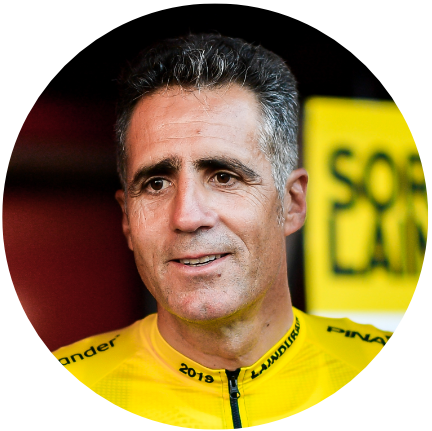 He also won several week-long tours and one-day classics, including such highlights as the Volta a Cataluña (1988, 1991 and 1992), the Paris-Nice (1989 and 1990), the San Sebastian Classic (1990), the Road Spanish Championship (1992) and the Dauphiné Libéré (1995 and 1996), doing particularly well in the time trial stages in order to obtain those victories, while being one of the best climbers on the cycling scene.

He is considered to be one of the best cyclists in history (along with Eddy Merckx, Bernard Hinault, Jacques Anquetil and Fausto Coppi) and the eighth best Tour de France winner according to a jury made up of five French specialists selected by the Tour organisation.

Miguel Indurain’s long list of achievements makes him the best Spanish cyclist of all time and one of the best athlete’s in our country’s history, known for his great capacity for sacrifice and his gracious winning style. He was awarded the Principe de Asturias Sports Award, among others throughout his sporting career.

VIDEOS OF THE 5 VICTORIES